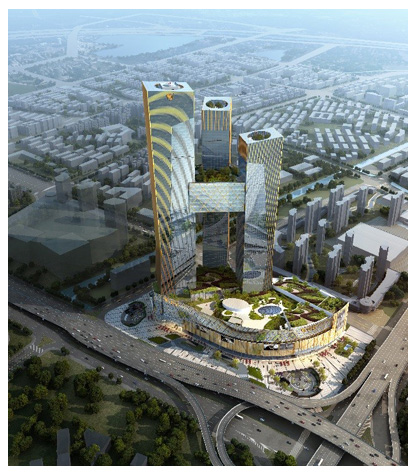 KONE Corporation, a global leader in the elevator and escalator industry, has won an order to equip Nanjing Golden Eagle World, an interconnected, three-tower high-rise structure, with 108 elevators and escalators. Located in the capital of Jiangsu Province, the Nanjing Golden Eagle World towers will include high-end offices and a five-star hotel. A lower building at the base of the three towers will house Asia's largest shopping center and a 5,000-space parking garage. The three towers of the development will be connected by a six-story skybridge that will accommodate restaurants and indoor landscape swimming pools.

"Nanjing Golden Eagle World is set to become a new landmark in a city that is known as one of the four great ancient capitals of China. I am proud that our solutions will enhance people flow for the numerous tenants, employees and guests of this striking, multi-use structure in this fast-growing city," says William B. Johnson, executive vice president for KONE Greater China.

The order was booked in the fourth quarter of 2017.

Previous press releases are available at www.kone.com/press including:

About KONEAt KONE, our mission is to improve the flow of urban life. As a global leader in the elevator and escalator industry, KONE provides elevators, escalators and automatic building doors, as well as solutions for maintenance and modernization to add value to buildings throughout their life cycle. Through more effective People Flow®, we make people's journeys safe, convenient and reliable, in taller, smarter buildings. In 2016, KONE had annual net sales of EUR 8.8 billion and at the end of the year over 52,000 employees. KONE class B shares are listed on the Nasdaq Helsinki Ltd. in Finland.

Are you interested in KONE as a corporate business or a career opportunity?